skip to main | skip to sidebar

In another case of crazy Brookfield drivers, the driver of a Prius passed on a blind hill while writing on a clipboard resting on his steering wheel.  Just a few miles down the road a woman was in such a hurry she passed into oncoming traffic so blatantly the other driver had to take evasive action.  SMH.
Posted by Jeff at 7:03 PM No comments: 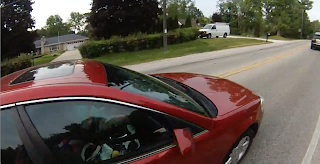 I don't know why I seem to run into so many problem drivers in Brookfield, WI.  I know good people who live there and everyone who drives through there can't be from there so I can't blame it on Brookfield residents I guess, but I can't figure out what it is that gives so many people on the roads of Brookfield such a bad case of "must get in front".
Tuesday evening at about 6:45 the driver of this red Chevy license 494-JTL had the whole oncoming lane available to safely pass and decided to buzz me instead, of course after honking at me. Note to drivers, honking first doesn't entitle you to break traffic laws at will. Sadly what can allow drivers to break traffic laws is a police department and city government that doesn't recognize the rights of cyclist to use the roads. 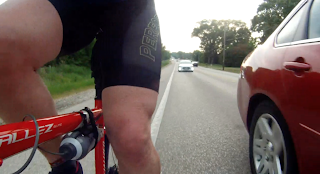 I guess I may have figured out why drivers in Brookfield are so bad when it comes to sharing the road with bicycles.
Just FYI I was riding on the white line and not on the shoulder because I had just hit two very large rocks that I'm surprised didn't flatten my brand new tire and then saw very large nails scattered on the shoulder so moved to avoid the hazards as I'm legally allowed to do.
Posted by Jeff at 6:21 AM No comments:

I see this all the time in certain parts of the Milwaukee area, but not usually out in the western suburbs at 8 a.m.
Until today.

I pull up to the light and like a good law abiding cyclist stop and wait for the it to change.  Good thing I did because this woman who, although you can't really tell from the video, was on her phone and proceeded to blow this light.  Now I understand if you misjudge and think you'll make it on yellow but this was red for almost a full second before she even entered the intersection.  I wish I had gotten the plate, I would have gone to the police for sure. People PUT THE PHONES DOWN!

If you kill someone while on your phone and you get sentenced to prison, I'm guessing you will realize that call or text could have waited!
Posted by Jeff at 6:16 PM No comments:

It happens quite often to bicyclists; drivers do something stupid, dangerous, or illegal, or all of the above which affects a cyclist, and if called out claim they "didn't see the bicyclist".  I've often thought this was more of an admission of guilt than an excuse, but regardless, it never ceases to amaze me how utterly clueless some people are while on the public roadways.

This guy then had the nerve to honk at me after I let him know that there was someone else on the road that had the right of way who he had cut off.

The woman driving the red car was looking the wrong way for almost the entire time she was turning.
She only looked in the direction she was turning at the last second.  I think the first car turning in front of me is what saved me from getting hit by the red car.  If I hadn't slowed down for the first car, I might have been going fast enough that I couldn't avoid the red car like I did.
I couldn't get the plate number.  I certainly would have called the cops on her if I could have.

All For a Red Light 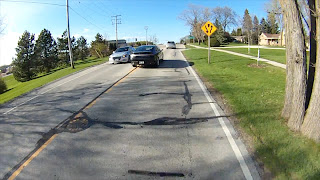 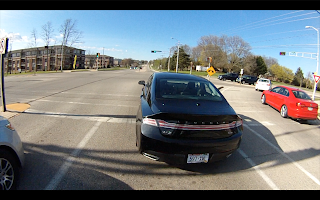 The woman in this Lincoln 597-XWL was in such a hurry to get around me that she had to pass into oncoming traffic in spite of the fact that the road widens out to two lanes in each direction just a few feet past her crazy pass.  But the most ridiculous part is that you could see the traffic light ahead, it was yellow, so she knew she'd have to stop and wait anyhow, but still felt it necessary to risk her life and the life of the driver in the oncoming lane.
Posted by Jeff at 6:11 PM No comments:

So I come around a bend and see this guy with a long white beard siting on a bench. 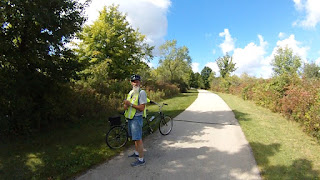 Apparently he was smoking a cigarette because he launched his butt onto the bike path.

I'm not a fan of launching your litter into a public park, so I called him out and told him if he didn't pick it up I'd call the police. On my way back through, he claimed he picked it up but and then proceeded to tell me how it was no big deal and that he's been throwing his cigarette butts on the ground since before I was born.  He seemed to think my calling him out on this was "being and asshole".  His words.  He was part of an organized ride so I told the organizers about his behavior.  Hopefully someone can explain that if anyone was acting like an asshole it would probably be the guy littering up the public park and then bragging about doing it for 50 years.
Posted by Jeff at 8:36 PM No comments:

Other Stuff Worth Checking Out